Bruce LaBruce’s No Skin Off My Ass 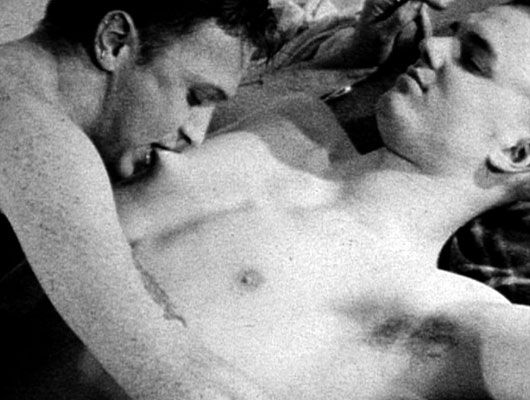 In perhaps the fullest flowering of Queercore cinema’s rebellion against both the mainstream and the burguning New Queer Cinema, Bruce LaBruce directs and stars as a hairdresser with a obsession for skinheads who picks up Klaus von Brücker in a park, takes him home, and gives him a bubble bath. After this encounter which includes the mute skinhead skanking to a ska punk cover of Nancy Sinatra’s “These Boots Were Made For Walking,” he sneaks out a skylight, and decamps for his sister’s apartment. The sister, played by zinester and filmmaker G.B. Jones, is shooting screen tests for her film “Girls of the S.L.A.” and hopes he will abandon his skinhead persona and accept his gay identity.

The film proceeds as an essentially sweet love story with LaBruce reappropriating Robert Altman’s early film That Cold Day in the Park in a gay context, subverting it, and revelling in the joys of transgression. With a soundtrack that alternates between hardcore punk and 60s and 70s pop fluff with explicit sex scenes between himself and the skinhead, No Skin Off My Ass presents itself both with hyperseriousness and ironic critique. And like any good socialist queer liberationist anti-assimilationist punk, LaBruce simultaneously explores the erotic obsession of the hairdresser for the skinhead and his directorial queer male gaze and ridicules the fascist and punk signifiers that are at the center of the hairdresser’s attraction.